The One Where Friends Fans Unite

The people have spoken and, as it turns out, the whole world loves Friends as much as we do!

On December 3rd Netflix added a notification to the Friends show page stating that the sitcom would only be available through 1/1/19. Within hours people LOST IT, taking to Twitter to express their grief, hurt and anger and starting petitions to keep the series alive. We get it – we’re huge fans too. And, if we had seen that notice first instead of reading the news in an article that insisted that the show was not going anywhere, we would have been crushed too!

It only took about a day for word to spread that Netflix was willing to pay big money in order to please the masses and keep Friends available to watch for at least another year. How much money? $100 million. Which is BIG money considering they were only paying $30 million a year to stream the show previously, according to a recent New York Times article. The outcry was so huge that it took only hours for Netflix to announce to fans that Friends would still be there for them in 2019. And, they even did it in a way that showed just how much they care about the feelings of Friends fans.

But, think about this… Friends ran from 1994 to 2004. It’s not a particularly recent show. So, how did the possibility of it leaving Netflix cause so many to threaten to leave the streaming service along with it? Because Friends has somehow made its way into the hearts of Millennials, Gen Xers and Boomers alike, proving that it is truly timeless. Boomers can relate because they know someone who never missed an episode. And, it’s no surprise to us that Millennials can relate to it for the same exact reasons we loved the show when we were watching it live on air. Characters starting out their “adult life” single, finding jobs, learning how to grow up, dating the wrong people, entering the “real world”, making it on their own, all while surrounding themselves with a tight-knit group of close friends and somehow renting totally unattainable apartments – what’s not to envy? 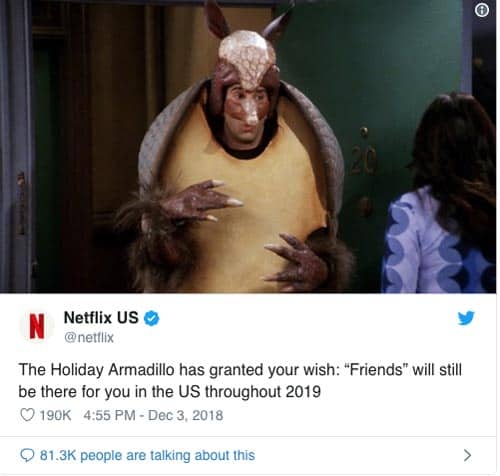 Friends taught us that maybe it was alright to job hop, to not find the perfect partner right away or to not have picture perfect, (no pun intended for you Jennifer Aniston fans out there!) super dependable parents to always fall back on. It gave us that assurance right from the beginning. The theme song for the series opens up with, “So no one told you life was gonna be this way 👏.” And, we hear messages in the pilot such as when Rachel asks, “What if it all doesn’t come together?”, or the very last line where Monica tries to tell Rachel, “Welcome to the real world. It sucks. You’re gonna love it!” They didn’t have to have it all figured out. There were six of them and not one of them really had it all figured out. And, it was okay because they always had each other. Which might just be the one thing that allowed the show to bring so many people together.

Clearly Netflix did not make Friends popular. But, some might say it made it popular AGAIN by making it so easily accessible. And, we must say that the whole situation hits close to home for us, both as Friends super fans and as marketing professionals. Tens of thousands of people talking about and reacting to such a small move speaks to what an iconic brand Friends is and to the level of brand loyalty it has generated.

So, let’s all celebrate this Christmas miracle and rejoice that all 236 episodes of Friends are staying put. At least for one more year. “And hey, here’s to a lousy Christmas. And a crappy new year!” 😉

With the right strategy, brilliant ideas can be created and results can be achieved. At Barcelona Creative Group, we create the right messages and determine the most effective channels to present your brand to the marketplace.

Barcelona Creative Group (BCG) is a full-service marketing agency focused on building brands both inside an organization and out in the marketplace to help businesses achieve results and long-term growth.