As you’ll read in the following article by eMarketer, mobile migration continues to take over. Its newest avenue? Social networking. As smartphones become the primary access point for media consumers, mobile advertising stands as a ripe and often underutilized opportunity. Why not reach people where they seem to be spending the majority of their time?

BCG sees the power of mobile and believes it to be a key component of a successful multi-channel marketing approach. Nearly every digital marketing product out there today reaches the target audience across all devices, including their mobile device. However, there are digital strategies specific to mobile such as Mobile Conquesting, which uses location based, demographic and behavioral targeting to reach consumers with display and video ads on their smartphones and tablets.

Ready to go mobile? Or, need to make sure your website is mobile-friendly? Then it’s time we talked. Contact us today!

This article was written by Blake Droesch and was originally published by eMarketer on April 26, 2019.

Fewer people in the US are accessing social networking sites via computers, with the majority of users now exclusively on mobile devices. We forecast that 51.7% of US social network users will be mobile-only in 2019.

But social network users have been largely mobile-exclusive for years. While they may use computers for school or work activities, their social media use is contained to tablets and phones.

We expect that social network users on desktops/laptops will decrease by 1.7 million in 2019.

Looking at individual platforms, the majority of Facebook’s US users have been mobile-only since 2016. This year, we expect that 66.3% of them will access the platform exclusively on a mobile device. Twitter will also continue to have a healthy share of mobile-only users at 22.9 million, or 43.1% of its US users.

Then there are the networks that are mobile-only themselves. Instagram, which can be accessed via desktop browsers but lacks essential features like the ability to post content, is the second-most-popular network in the country, with 106.7 million users. And Snapchat, another network that’s essentially mobile-only, will have 77.5 million US users this year.

How are marketers responding to the shift?

The vast majority of Facebook’s ad revenues already come from mobile and have since 2014. Its mobile revenues will continue to grow—reaching 94.0% of total ad revenues this year—and rumors have abounded that the company will increasingly look to “mobilize” its platform in the future. Perhaps most telling is that Facebook has begun internally testing a prototype that would shift its marquee News Feed to a more mobile-friendly swipe interface, suggesting that its future ad placements will take the form of vertical images that are fit for mobile screens. 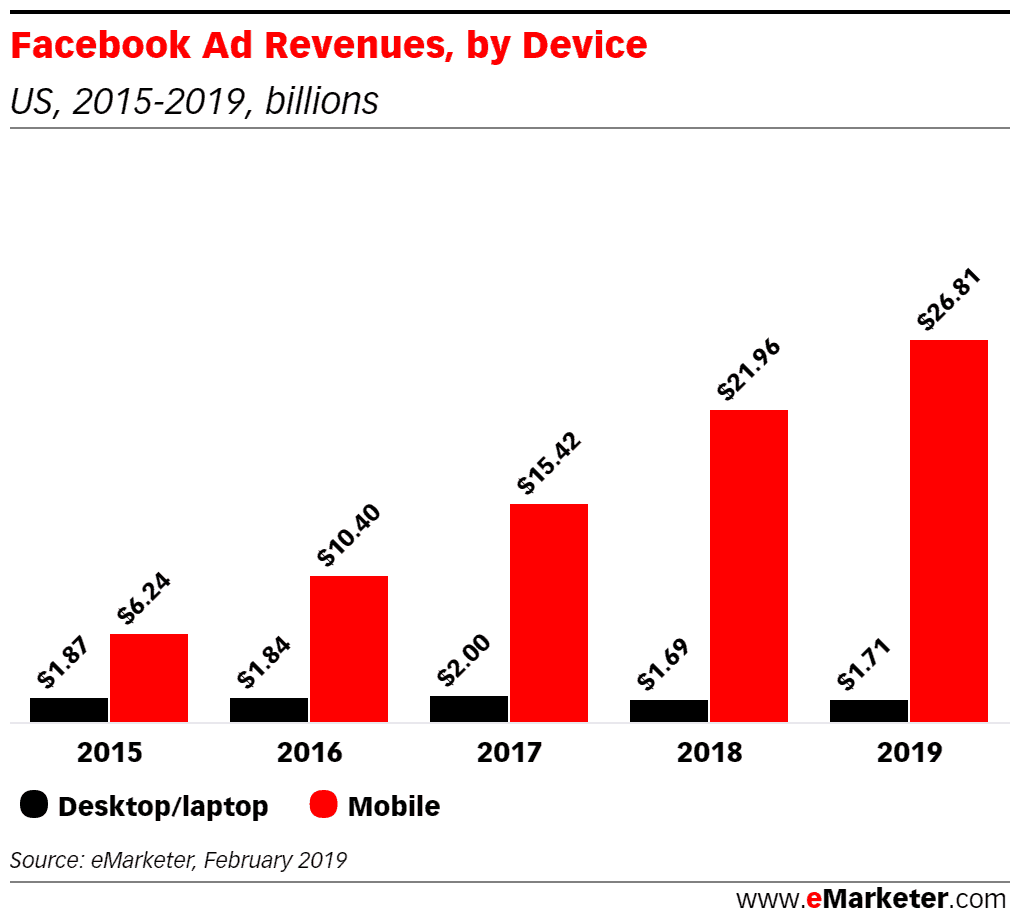 Native mobile ads in Stories are also of great interest to marketers. In the three years since Instagram launched the ephemeral feature, advertising through Stories has come to make up a large chunk of its ad business. Again, given the aspect ratio of Stories, it requires an ad placement that has little use anywhere outside mobile. But marketers are investing. Nearly one-third of all Instagram ad budgets have gone to Stories, according to a 2018 survey of US senior ad buyers conducted by Cowen and Company. 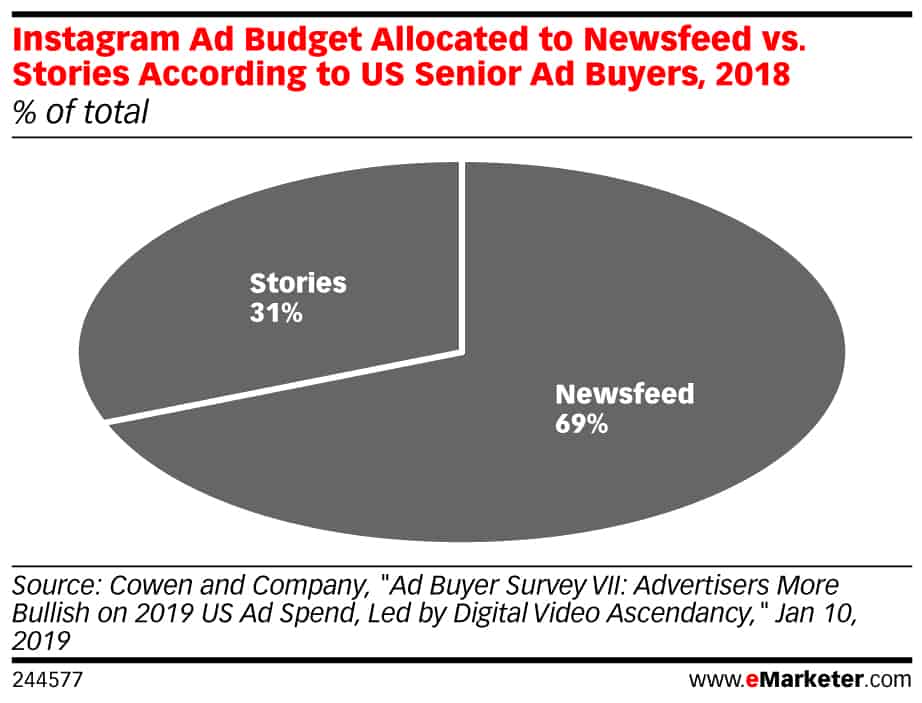 And investments in mobile-only social media strategies will continue in the future. Sixty-four percent of companies worldwide have looked to adopt Instagram Stories, according to a survey conducted in Q3 2018 by social media management platform Hootsuite. 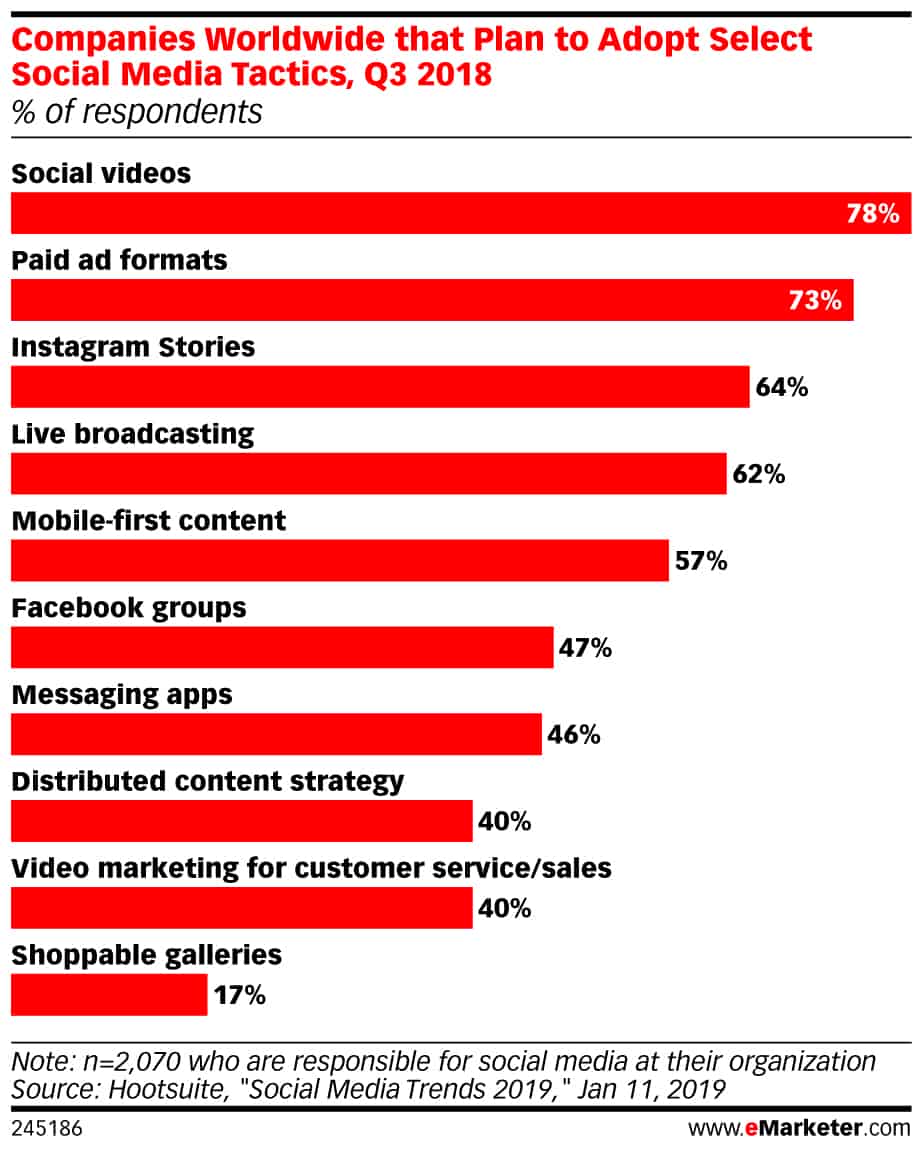 Additionally, 57% of companies plan to include mobile-first content in their social media tactics this year. 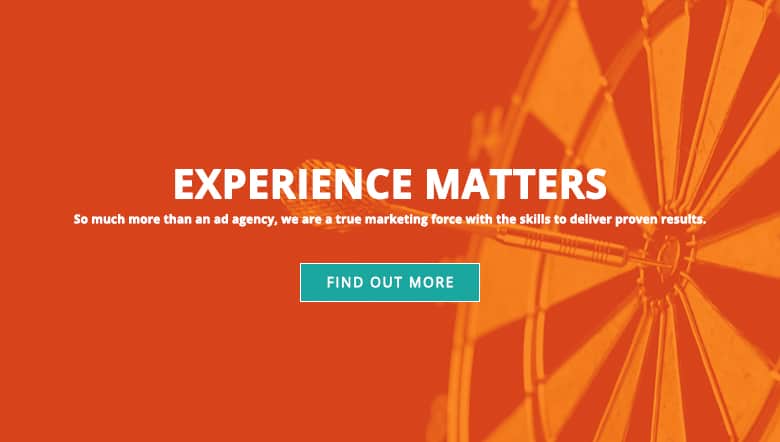 Tweets by @barccreativegrp
Go to Top