Average Time Spent with Mobile in the US Will Surpass TV Time in 2019!

Mobile device use will now surpass time spent with TV this year, according to a newly released eMarketer article. This reality brings with it a number of awesome opportunities to add to your marketing strategy, including digital audio, connected TV (over-the-top video), household IP targeting (a.k.a. digital direct mail) and mobile conquesting options like geo-fencing, geo-framing and mobile retargeting – just to name a few! Creating a smarter, more powerful marketing plan requires leveraging the ever-changing media landscape, so you can connect with your audience in a more effective way. Building a multichannel strategy that reaches and engages your audience begins with knowing how they access media. Right now, the answer is mobile.

This article was written by Amy He and was originally published by eMarketer on June 4, 2019.

For the first time ever, US consumers will spend more time using their mobile devices than watching TV, with smartphone use dominating that time spent.

Consumers’ use of smartphones will continue to make up the majority of their media consumption, but we predict that use will plateau by 2020, as consumers become increasingly uneasy about overuse of mobile devices. 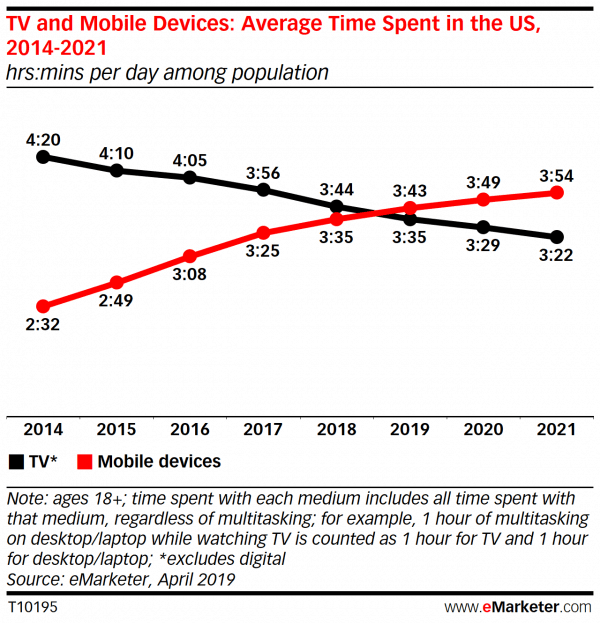 Tablet use among US adults continues to lose ground, having peaked at 1:11 daily in 2017 and dipped to 1:08 this year. This trend will continue through 2021.

“We’ve expected that mobile would overtake TV for a while, but seeing it happen is still surprising,” said Yoram Wurmser, eMarketer principal analyst. “As recently as 2014, the average US adult watched nearly 2 hours more TV than they spent on their phones.”

What are people spending time on their devices doing? They’re consistently spending the bulk of their time using apps over web browsers, with the average person spending 2:57 in apps vs. 0:26 on a mobile browser.

Within apps, people spent the most time listening to digital audio, followed by social network activity.

“Digital audio apps continue to add minutes because people are streaming more music on their phones, and podcasts have taken off in popularity in the past few years,” Wurmser said.

Longer term, smartphones will remain the dominant device for consumer media, but backlash continues over screen time, even if broader consumer behavior has not reflected these sentiments. Companies like Google and Apple have introduced screen time controls, but how useful they are in ultimately changing behavior remains to be seen.

Barcelona Creative Group (BCG) is a full-service marketing agency focused on building brands both inside an organization and out in the marketplace to help businesses achieve results and long-term growth.